I am Norbert Hidvéghy; I was born in 1987 in Budapest. I am interested in the values of the past and the history since my childhood. I started to research of my own family tree when I was 18 in the way that I personally only knew my grandparents and my great-grandmother. One of my second-cousins was so lucky to know our common great-great-grandmother which is a very rareness. My paternal grandfather was in the second Word War then he captured into Russian prison where he completely became weak. Luckily, he could escape with the help of an Austrian man and he returned to his living place in Pécel, then he got married with the woman he loved, my grandmother from Füzesabony. After some decades the Austrian man looked for my grandfather because he was wondering whether my grandfather lived through the war. They kept the contact until their death. And we keep in touch with the descendants. Regarding to the origin of my father, both of my grandparents are from Füzesabony, but my Hidvéghy great-grandparents moved to Pécel because my great-grandfather got a job at the railway company, but often they went home to the relatives and in this way my grandfather knew my grandmother. During the family tree research you could never know what to find, where your roots lead back. When I was searching my paternal side almost everybody originated from a simple peasant family while I found noble ancestors which made me surprised. I am the descendant of the noble Vass family from Besenyőtelek by Éva Vass who was born in 03.13 of 1742. An unknown town can be there anytime as the birth place of the ancestors; the same was happened in case of Felsőtárkány, Mezőtárkány, Maklár and Tiszafüred. It is also interesting that the birth place of my one ancestor was named as Hidvég, which today is the part of Sarud village. During the research of my paternal grandmother I found a noble ancestor named Mihály Both who had married a Terézia Bruch named girl. I also found another noble person named József Kerekes whose place of origin was marked as Eperjeske in Transylvania. Though Eperjeske is in the Nyírség, but the parents of József Kerekes are József Kerekes from Kerek and Sára Bakos from Hajdúbagos. My ancestors from Felsőtárkány were appeared from maternal side as the Bajzáth family which is the most popular family name in the town even today as well, and they are the descendant of a Turk who stayed in Eger. Most part of my ancestors is from the persons who were in the first colonization. Among the family names those are occurred which refers to a profession, such as Szabó (Tailor), Hegedűs (Violinist), Ács (carpenter), Juhász (Shepherd). There are family names formed from surnames, such as Antal (Antony), Gál (traditional Hungarian surname), György (George), and Vincze (Vince). Names from nature: Fodor (Frill), Nagy (Big), Veres (Red), Fekete (Black). Names from folk name: Horváth (Croatian), Németh (German), Tóth (Slovakian), Cseh (Czech). The town names refer mostly to the previous origin. In case of my paternal ancestors, the most people have the names from the surrounding Bocsi (from Egerbocs), Csanálosi (from Újcsanálos), Sári (from Abasár), Hanyi, Czeglédi (from Cegléd, it is a part of Eger), Patai (from Gyöngyöspata). But there are names which refer from farer origin, such as Árvai (from Árva), Erdélyi (from Transylvania). 5% of the names are from non-Hungarian origin, as Bruch (German), Nahóczki (Polish), and Ossó (Slovakian). 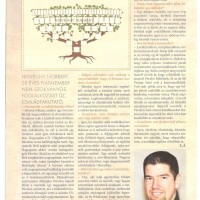 Interview in Transylvanian magazines called Krónika and Csíki Hírlap about family research in Transylvania, an interview published online by Székelyhon (in Hungarian): 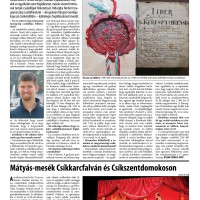 Article on the blog of Ocna de Jos, a town in Romania (in Hungarian):

At the invitation of Panoráma Világklub, I held a presentation in Székelyudvarhely (Romania) with the title “Who were my ancestors and where did they live”, which appearedin Magyarság [Hungarians], a newspaper headquartered in Toronto and available in the United States and Canada. 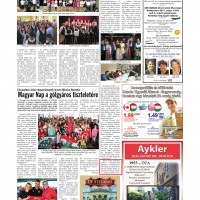 I gave a lecture in Budapest at Bujdosó Székely Restaurant with the title “The present of family research in Gheorgheni”. 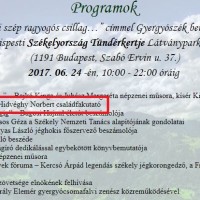